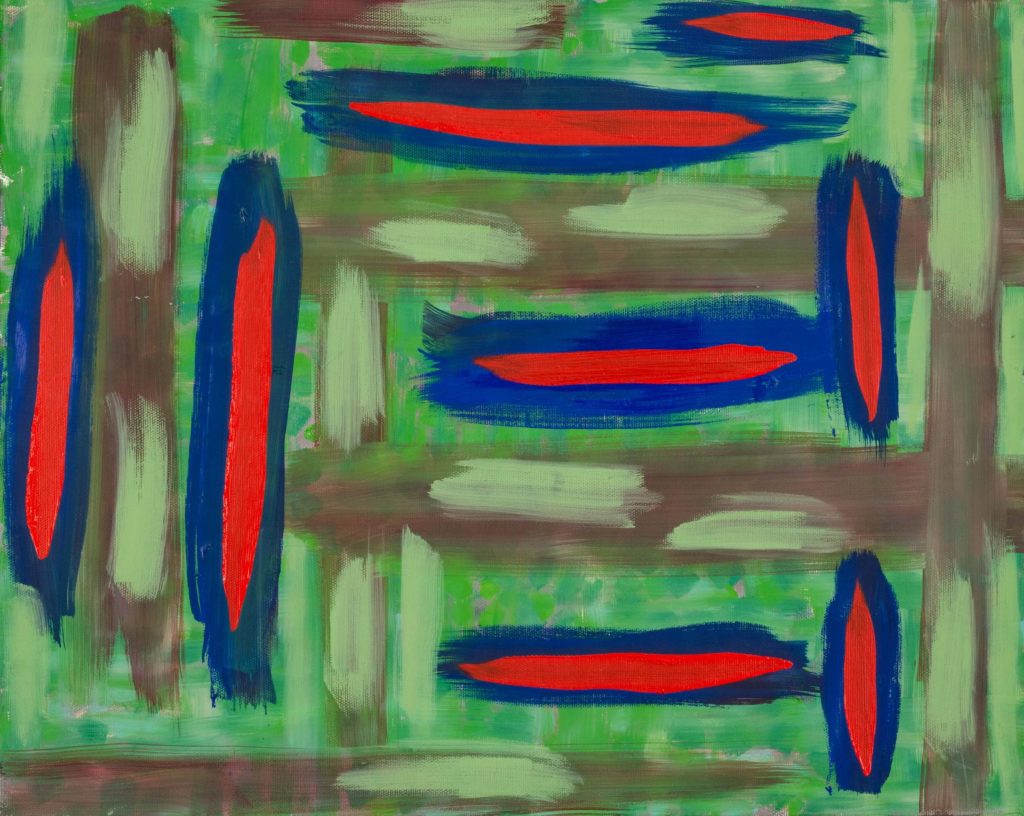 I was somewhat surprised and reluctant to invite the elderly man into my studio. He was unkempt in every traditional way. He did possess one characteristic that if scrutinized with some care, I would have given more thought to my friendly open door. His hazel eyes were peculiarly shaped. There was a haunting stare, one that I learned later had a power to evoke evil spirits.

He came looking for a painting. A painting to be hung in a cabin; as he told me; one that he already knew existed somewhere in my painted works. He firmly stated, “Show me where you keep your older works of art.” I politely replied, “ You act as if you saw this painting of mine before.” He replied gruffly, “I have.” We entered the room where I have no less than 100 paintings stored. With much haste, he quickly moved several paintings to the side as if he knew right where to look, to my surprise he did know. He picked up, or should I say he grabbed a smallish painting that I had all but forgotten. “That’s not a good work of mine, I confessed.”  He looked at me with mulish eyes and in a gruff speaking voice, he announced to me,” I will take this picture back where it belongs,” as if he owned the artwork before. I don’t know why, I just blurted out, “It’s not for sale.” He bolted back with the work firmly clenched in his hands, and simply said, “You have no choice.” “It’s really a very weak piece of art” ‘ I said, “I’m embarrassed that I did not paint over that canvas. I never thought anyone would ever consider collecting it except maybe the junkman.”

As I looked at the canvas he was so aggressively holding, I started to remember: no one in my family trusted that painting. They often commented,  “That painting has a demon aura.”

I confess; it did give off a macabre energy. I never felt I was in control of the paint brush, nor the paint. It seemed to paint itself; I was just there to observe as the canvas took on its own disagreeable persona.

My art buying visitor, reached into his pocket and pulled out a disorganized crumpled handful of $100 bills, and all but threw them at me, as he instructed me to show him to the door. I reluctantly complied.

Close to a year later, I learned more about the destiny of my forlorn painting. The knowledge of its whereabouts came from a visit by a local sheriff, who knocked on my door one Saturday afternoon.  He showed me a photograph of my painting that looked to be hanging on a wall of a smallish mountain cabin.”

The sheriff asked, “Do you recognize the painting in this photograph?” After less than a minute observation, I responded, “Yes!” I sold that painting to a very odd gentleman that visited me quite some time ago.” The sheriff looked at me with a sorrowful and disquieting expression, and proceeded to tell me, “Your painting ended up in a rental cabin, referred to as cabin 501, in a remote area. No one knows how it got there, but everyone who stayed in the cabin felt an uneasy presence that caused great emotional suffering, even thoughts of suicide or worse yet murder. They all agreed the energy was coming from your painting.” Needless to say, I was in shock.

I asked the sheriff, reluctantly, and with much trepidation, “Did anyone lose their life?” “We don’t really know,” he added with that same expression from before, “There appears to be numerous shallow graves in the woods close by the cabin. A woodsman’s axe was found driven in to an old dead tree, by the shallow grave area. What’s even more weird, is virtually all of the trees in that area are dead or dying.”

I blurted out, “No one could possibly believe my painting had anything to do the strange happenings in or around that cabin.” The sheriff just shook his head, paused for a moment: “Pretty far-fetched, huh?” He then headed for his car; I followed him and asked,  “I have a question?” He stopped, “Go ahead.” I continued, “How did you know that was my painting?

I know for a fact I did not sign that work.” The sheriff said,  “You confirmed it was yours, when I showed you the photograph.” I replied, “So I did. But why did you come to me?” The sheriff stated matter a factly, “The investigator just asked various people in the neighborhood if there were any artists in this area. Your name was mentioned several times.” “Where do we go from here,” I asked uneasily?”

The Sheriff’s response was somewhat predictable. “We will contact you if we need more information, but let us know if you plan on leaving town.”

I did not hear anything as to what was happening, in, at, or around cabin 501. Nothing was reported in the newspapers. No one was talking. Then the media got a hold of the story and all hell broke loose.

The above writing is a condensed excerpt of the soon to be published book. As this story reveals several  “twists and turns” you will have to wait to read the book to find out what happens. The book will be published late first quarter 2020 under my pen name,  R. H. Jones. The title will most likely remain the same.