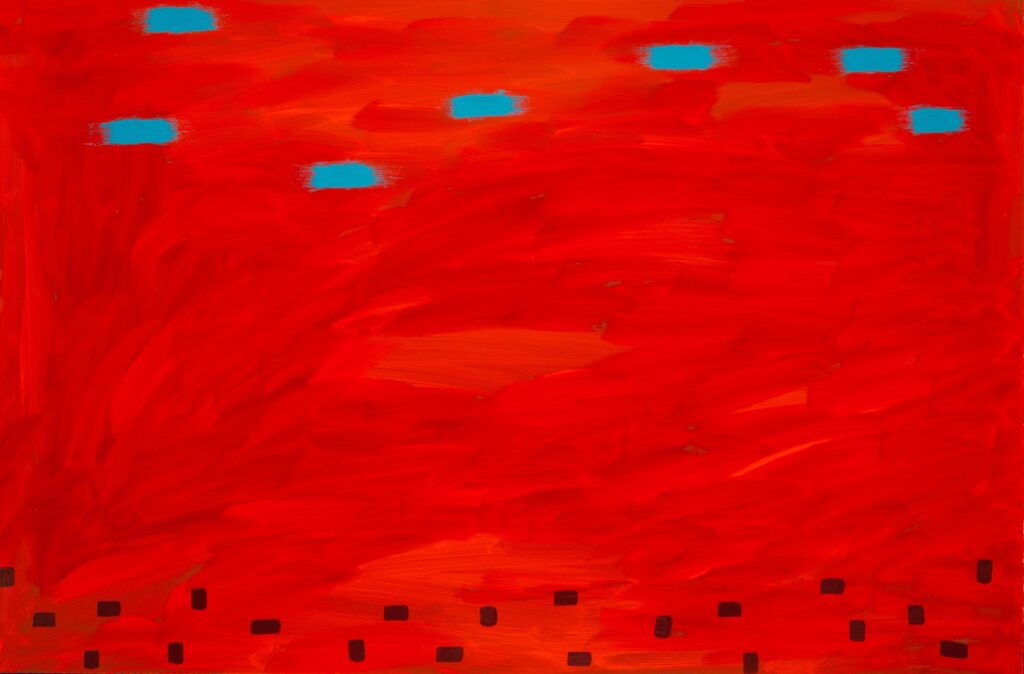 It was a tequila sunrise: I put my well-being in the hands of my black Renegade CJ-7  Jeep, that it and I explored much of the South West, in a most carefree fashion. No physical terrain was too challenging enough. Temperatures often soared into the three digit range. For air conditioned cars, not much of a problem. But an open Jeep with a roll bar and a bikini top to keep the direct sun off of its inhabitants, rarely had much of an impact on the ambient temperatures. A coolbox with gallons of cold water was a mobile oasis at the ready to quench one’s thirst. The most useful accessory for the desert travelers wardrobe is a bandanna; mine a black one, to complement the exterior and interior of the Jeep. A wet bandanna wrapped around the neck that somehow manages to maintain a coolness many degrees below the blistering heat, is cowboy air conditioning. A scientist will tell you, it’s the rapid air moving in, on, and around that wet handkerchief, that makes it cool down pretty much like a swamp pump “evaporative cooler” that you most often find on the homes of desert dwellers. However it works, it becomes a must have deterrent to the un-welcomed seasonal heat of the desert.

The South West jaunts started for me at a very young age, with my parents driving us kids around the desert states. Once I could drive, I began my own solo adventures: call it, “a family tradition.” My explorations became a whole lot more fun, when I met my bride to be in the 80s. She had a venturesome spirit, and quickly became my co-pilot and co-driver on our Southwest Jeeping road trips. She was heaven sent, my true soulmate, and she could read a Topo (Topographic) map better than I ever could. And no, that wasn’t enough to build a lasting romance on. But she quickly became a living angel to me. She was, and still is my most trusted friend, confidant, and lifelong lover.

The luxuries of fate: after I left the Navy, I became a commercial photographer. It took me several years to succeed but eventually, I had a large commercial studio in San Diego. This business that I so dearly loved, afforded me the opportunity to take time off with some frequency. It also provided the dollars necessary to buy gas, food, and when it was impractical to sleep out in the open, lodging, on my many trips throughout the West. The best adventures and best times begin when I married Inci. Whose nickname from her early childhood was Angie. To this very day myself and our friends, call her Angie. Creatively, she is better known Inci Jones Artist, that’s what she uses for her artwork and for her published writings and books.

You might imagine, if you ever got us talking over a glass of wine or two, we’d have some stories to tell. The interesting thing about traveling in an open Jeep, you quickly embrace the fact that you don’t need formal paved roads. The best thing  you experience are the things you see, hear, touch and smell in the ruralness of the desert, and it’s not too uncommon to run into fellow explorers; they are usually quick to share their experiences and point you into new directions and discoveries. It’s just plain old fun!

The weather: there’s plenty more going on than you might think; thunderstorms in the summer can pop up almost anywhere at any time. They are cooling and refreshing and bring up the humidity. A close lightning strike can make your hair stand on the end, and give you a fright, that you rarely can ever forget. Picture yourself traveling on a barely distinguishable dirt road up above Utah’s Monument Valley. We parked by an old shack, that I’m guessing belonged to at one time an Indian sheepherder. While we were entranced by the vistas before us, the skies darkened behind us and then above us. “Boom!” The crack of lightning shattering the serenity of our sentry like position, nearly at the top of a hill. “Boom!” In succession they came almost symphonically. You could hear nature’s kettle drums. We could feel and taste the electricity in the air, and yes it does have a taste, somewhat metallic on the taste buds… indescribable, but it’s definitely there. The sensations become companions to your body, already covered with goosebumps, frizzy hair and ringing in ears.

After the thunder; rain is almost always guaranteed. Did we get wet? Of course we did, but after the heat of the desert, it was a welcome and refreshing shower bath. Rainwater from the clouds above brings life to the desert. Stream beds that had been dry for months can become raging rivers. The flora and the fauna of the desert become revived. The smell of a wet creosote brush, outperforms even the most expensive fragrances. A high desert storm provides multiple pleasures for your senses. The red dirt that is associated with this part of the country, becomes wet with rain, and quickly transitions into a beautiful rust color. You can see how it becomes nourished by the droplets that first strike the soil.

“There must be a rainbow.” Of course there will be a golden arch of splendid colors, no doubt leading to a lost gold mine or centuries old buried treasures… You can imagine a stash that was buried by a Spanish explorer, who broke ranks to hide his pilferages from the heavily laden chest filled with gold and jewels that his superiors forced him to carry across the hot dry desert. Besides plenty of water and grub, we always carry a pick and shovel in the Jeep, just in case.

There are many fun and positive experiences to be discovered in the back roads of America’s southwestern states. You will never see much, looking out the window of an air conditioned car speeding 80+ miles an hour traveling down the freeway. The real joy lies in the remote areas, especially the ones that are hard to get to. You often have to hop out of your Jeep, and hoof it quite a ways to discover the generous beauty nature has to offer. There’s even more excitement when you discover an old settler’s cabin. Or the remains of a Calvary camp. You may come upon an old mine. If you do, you need to be extra careful! You may find this hard to believe, but some of those old mine shafts can swallow up your Jeep and you with it, if you’re not paying attention and plunge into one. Then there’s a good chance no one will find you; and if they do, they might just find a skeleton holding the steering wheel with its seat belt still on, and your mouth wide open, denoting a scream. I hope I make my point here. You really have to pay attention when you drive out in the wilderness, and this should go without saying! Old mines can be extremely dangerous if you decide to venture into one. Make sure you never go in alone and make sure you have more than one flashlight.

The desert; has many beautiful jaw-droppers, but you shouldn’t be surprised when you run into snakes, scorpions, spiders of all shapes and sizes, plus rats, (not the two legged kind) of course. If you maintain a sharp eye you will see plenty of four paws running around. I discovered if you leave them alone, they’ll leave you alone. They don’t like confrontations with humans; and for that matter we ‘out and about’ desert travelers, don’t much like to bother them either. The sky can be filled with birds, especially vultures. You mostly see these very unattractive sky and land dwellers circling above and an unfortunate animal that lost its life generally during the night. You ain’t seen nothing, until you swing around a large outcropping of rocks, and see a bunch of vultures picking at the last remains of a lost steer. Especially if you are contemplating having your own lunch shortly.

Unseen spirit guides. If you like to meditate and transcend negative thoughts, the Southwest may be the place where you can reconnect to your inner peace. My wife and I have always discovered that the remote places we found ourselves in to be very spiritual. Our thoughts became creatively productive, it’s almost as if we were being guided by untouchable forces. You will find a tremendous sense of self-awareness and freedom especially when you find yourself in the middle of vast open spaces, where you can almost see the curvature of the earth in the distance. The deep blue sky with giant cumulus clouds meandering from horizon to horizon, remind you that you are a very minor player in the vastness of your surroundings. Seek and you shall find the self you know and love and want to be. These are the places that bring on great art , music and profound literature.

The trip home to San Diego, often meant spending the night in Yuma Arizona at the Shilo Inn. Angie and I would be dog tired, but we always managed to get up at the crack of dawn just before sunrise. There was a McDonald’s that sat on top of a rocky knoll. The parking lot faced east overlooking the desert and provided a stunning sunrise watching spot. We would order a couple of sausage McMuffin’s with egg, drive over to the best parking spot on the edge of the lot, that pointed to the glow on the horizon. We’d shut the engine off, leave the radio on Wickenburg Arizona’s Real Country station 96.3  . Invariably there would be an old Patsy Cline song playing. But sometimes we would get really lucky, and there would be an Eagles song playing; the one we both liked, with the infamous lyrics, “Don’t let the sound of your own wheels drive you crazy.” Either way, that always became our cue to pull out 1/2 pint of José Cuervo Gold tequila from the cool box. We watched the sunrise as it formed, taking a bite of the Egg McMuffin and its peppery tasting sausage patty, and then taking a sip of the peppery tequila. Somehow these two gourmet and savory palate tingling delights made life worthwhile. Angie and I would look into each other’s eyes with love and propose a toast to each other with our last gulp of tequila and say, “It was a tequila sunrise.”